Other Worlds Are Possible: Life Against and Beyond Neoliberal Logics
Middletown, CT, United States; Oaxaca, Mexico

This four-week intensive course examines radical challenges, in theory and on the ground, to mainstream neoliberal capitalism and development strategies promoted by international organizations such as World Bank and the IMF. After the 1980s, considered by many as “the lost decade” of development, some scholars and practitioners declared the development enterprise as fundamentally wrong: It was a misguided and violent neocolonial project that could never provide the answer to inequality and poverty. These radical critics argued for building a “post-development” era. In this course, we look at the conceptual history of the term “post-development” and also examine what post-development life looks like on the ground, among dispossessed communities. We will focus on lived and imagined challenges to neoliberal capitalism. We spend the first week at Wesleyan, brushing up on the critical ideas and movements that have emerged out of Mexico (and Latin America, broadly) over the past four decades in reaction to mainstream development discourse. We will then explore these ideas and lived alternatives in Oaxaca, Mexico. We will spend three weeks learning about and working with marginalized communities that are rejecting capitalist development and building and experimenting with living a “good life” (buen vivir) on their own terms.

Application and deposit due by March 8. Current sophomores and juniors may apply. Limited financial aid is available for this program.

If your schedule is incorrect, goto online instructions and come in to meet with your class dean.

Working on your writing? Don’t go it alone! Instead, make a free one-on-one appointment with peer writing tutors at the Writing Workshop. Trained to help Wesleyan writers at any stage of the writing process, writing tutors are available, by appointment, Sunday from 2-11 and M-Th from 7-11 in locations across campus.

Make an appointment by going to Wesportal→ Academics–>Writing Workshop Account. You’ll be asked to make an account before being brought to our online scheduler.

Want semester long support? Apply for a writing mentor who will work with you for an hour every week. Focus on specific writing tasks like organization and time management with the help of a trained peer!

Learn more at https://www.wesleyan.edu/writing/writingworkshop/resourcesforstudents/index.html or email the Ford Fellow, Dache Rogers at writingworks@wesleyan.edu

Assistant Professor of the Practice in English

This course will explore the intersections between the living, the dead, and the state, focusing on the ways that death and the dead body raise particular questions and problems for different kinds of political regimes. The course will examine the collisions between the state and the dead, both symbolic and material, by investigating spaces where the state and death intersect in revealing ways: cemeteries, cremation, monuments, rituals, and religious institutions and cultures. The course will also follow, borrowing anthropologist Katherine Verdery’s term, “the political lives of dead bodies,” the ways in which states mobilize dead bodies to reconfigure the political order.

Reversals of fortune have defined Russian history perhaps more so than for any other nation. Though the Russian Empire began the 19th century as an emerging European superpower that defeated Napoleon, it ended that same century as a backward state plagued by political, economic, and social strife that ultimately brought the Romanov dynasty to a revolutionary collapse. A similar trajectory describes the “short” Soviet 20th century that began with the promise of a qualitatively new political order that sought to transform social relations and human nature and concluded with a spectacular implosion that some heralded as the end of history itself. This course will follow the story of how the Soviet Union emerged from the ruins of the Russian imperial order to become the world’s first socialist society, the most serious challenge to imperialism, liberalism, and capitalism, and, arguably, modernity’s greatest political experiment. We will cover the following topics: the emergence and fate of Russian national identity; the origins and dynamics of Russia’s revolutions; the political, economic, and cultural challenges of the Soviet project; the role of the party and ideology in politics and everyday life; the nationalities question and the challenges of governing a socialist empire; Soviet victory in the Great Patriotic War and the rebirth of the nation (and nationalism); the emergence of the Soviet Union as a Cold War superpower; the country’s historic attempts to reform (and the frequent failure of these attempts); and the dynamics of the system’s collapse.

And if you have advisees who are interested in literature, there are seats available in my course on the Central and East European novel, in which we read some of the greatest works of the 20th century. No prior knowledge of the area or its history is required or presumed.

This course is a survey of 20th-century prose fiction of Central and Eastern Europe, with an emphasis on the Czech novel. The novels we will read make history come alive through the eyes of vividly individual characters. In Joseph Roth’s RADETZKY MARCH, the collapse of the Austro-Hungarian Empire is viewed through the lens of a single heartbroken family; in Bohumil Hrabal’s I SERVED THE KING OF ENGLAND, the Czech experience in World War II and postwar Stalinization is embodied in the figure of a diminutive hotel waiter; Milan Kundera’s THE UNBEARABLE LIGHTNESS OF BEING refracts the Soviet domination of Czechoslovakia through the traumas and love affairs of a quartet of characters; in Witold Gombrowicz’s TRANS-ATLANTYK and Aleksandar Hemon’s THE QUESTION OF BRUNO, the main characters find themselves in a foreign land when their home countries (Poland and Yugoslavia, respectively) are torn apart by war. All the works we will read exemplify the high level of narrative sophistication, in realist, absurdist, and experimental modes, that is a hallmark of Central and Eastern European literature.

If you “are looking for an interesting class about Israeli cinema taught by an energetic and lively instructor, there are seats available in the new course  CJST 249: From Black and White to Colors: Israeli Cinema a Melting Pot Fragmented.  The course is taught by the Center for Jewish Studies Scholar in Residence, Amir Bogen who is a long time journalist and film critic.

Here is the link on Wes map:

From Black Panther to Wind River, from Dear White People to Crazy Rich Asians, and from How To Be A Latin Lover to Menashe – in the last couple of years Hollywood hails diversity as a prominent value of contemporary American society. In the fantastic realm of fictional narratives, the USA is seen as a nation for all where there is a space for every culture to express itself freely, and being genuinely represented at least on screen.

In the course From Black & White to Colors, we will take a critical look at Israeli Cinema and delve into it as a case study of a “melting pot” that was dissolved into fragments. Through a variety of films in different genres – dramas, comedies, musicals, and thrillers – we would follow the issues of representation on the screen and real life, then and now, and we will ask how does an immigrant-based society evolved from the national towards multi-ethnicity and diversity. Is it still the case of a culture that is bigger than the sum of its parts, or maybe it was always a story of particles trying to be particular while being edited in history books, scripts, and movies. Israeli, and American.

Amir Bogen is an Israeli film journalist and a scholar. He covered American, International and Israeli cinema for over a decade. He also hold an MA in film theory from Tel Aviv University. His thesis deals with fascist models in Star Wars and Superhero movies, a topic he expends in his current dissertation as a PhD candidate.”

This course, directed by Adjunct Assistant Professor of Music Jin Hi Kim, is an experiential, hands-on percussion ensemble with the predominant instrument in Korean music, the two-headed janggodrum. Students will learn to play a range of percussion instruments including janggo, barrel drum (buk), hand gong (kwenggari), and suspending gong (jing). Through the janggo drumming students gain first hand experience with the role music plays in meditation and the benefits it offers to develop a calm, focused group experience. In the end they integrate their focused mind, physical body energy and breathing through a stream of repetitive rhythmic cycles.

They will be introduced to traditional folk and court styles as well as creative collaborations with a dancer(s) or musicians from other cultures, if there is an opportunity comes in during the semester. The ensemble plays pieces derived from tradition and new ideas and creates new work exploring imaginative sounds on those instruments. The ensemble will experience a deep respect for the diverse cultural backgrounds of the students developed from the efforts of teamwork and creating music together through Korean drumming. The semester will end with a live performance for the public.

I still have a few spots left in WRCT 135 – Writing about Research: US Style….This course is designed to prepare international students and non-native speakers of English to write about research in U.S. academia. Students will focus on the structure, cohesive devices, citation styles, and academic vocabulary commonly used in literature reviews, theoretical papers, and primary research studies. As a topic of common interest, example readings will focus on language research including statistical analyses of language learners; the civil rights of international students, multilingual landscapes, social media’s effect on language, and the advantages of being bilingual. Throughout this course, students will learn skills for organizing longer papers and practice the mechanics of good writing.

Assistant Professor of the Practice in English/ESL 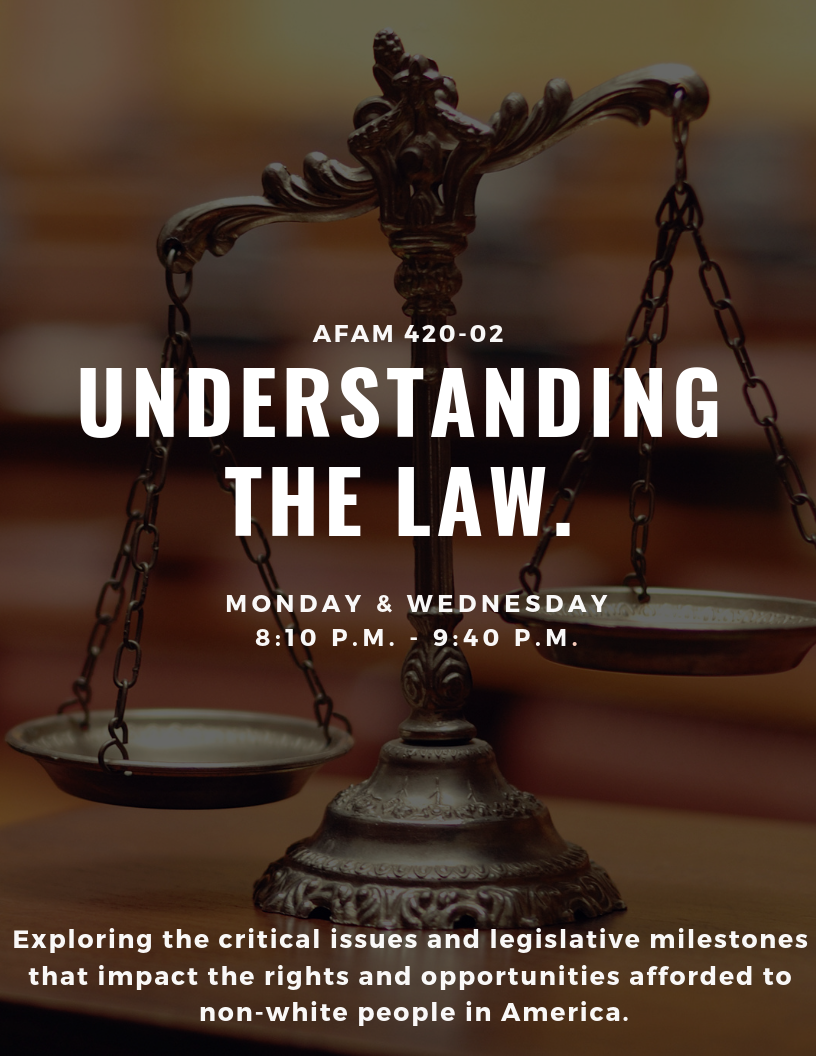 Contemporary Dance Technique is a course that practically considers our moving bodies through cultivating awareness and exploring weight, shape, space, and time along with a deep sense of kinetic connection within the body and among bodies. This semester, the Contemporary Dance Technique class will also partner with the Zilkha Gallery exhibit Audible Bacillus.  As a class, we will explore the images and artworks in terms of process, composition, and theme and create an informal performance sharing layer to the exhibit.

As you approach the end of the semester, please take care of yourself as you tend to your academic and personal obligations. Here are a few reminders:

Form must be signed by course instructor and faculty advisor prior to Class Dean. 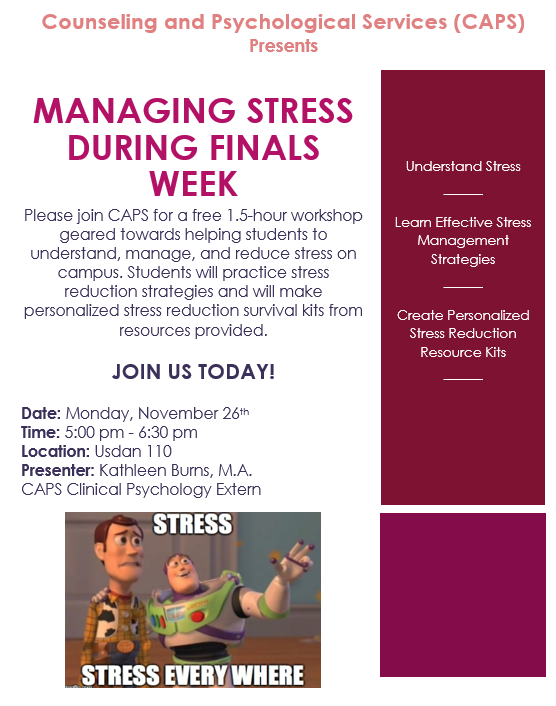 If a student has three or more final examinations on one day or four in two days, the student may request a rescheduled examination from one instructor.

Other times by appointment

Thoughts from a Peer Advisor: Emailing Your Professors